The Innocence of a Child 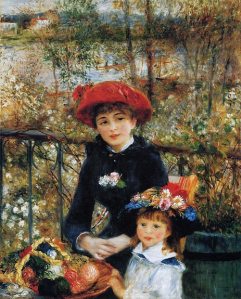 The title of this painting is Two Sisters on the Terrace (1881) by Pierre-Auguste Renoir and can be found in the permanent collection at the Art Institute of Chicago.  A framed print of this painting has also been a permanent fixture in our dining room since 1998 as we gathered around our table with our four daughters to enjoy Mom’s delicious meals, Dad’s corny jokes, laughter, occasional tears, and many life-long friends.  As we have moved through the years from Mabank to Milwaukee, back to Texas (Canyon) and now in El Paso, these two sisters always find a prominent place in our dining room.

Aesthetically, this painting is very pleasing to the eye and has been praised by Renoir’s critics as one of his finest.  From his deep blue’s in the older sister’s dress and the younger sister’s hat and kerchief to the crimson reds which become the focal point of the painting and draws you eye to the little girl’s checks and ruby lips, Renoir mixes his palette to hold our attention.

In addition, I love the expressions that he gives his characters.  The older sister is looking off to the side, perhaps watching the action in the café behind the artist, holding her pose carefully.  And then, the younger girl rushes in at the last minute, placing her little hands on the basket of yarn, looking right at the viewer, wanting to be part of the picture but can only hold still for a short time.  Renoir had a great ability to capture the beautiful innocence of children in every-day life. He showed this painting at the Second Exhibition of the Impressionists in 1876, 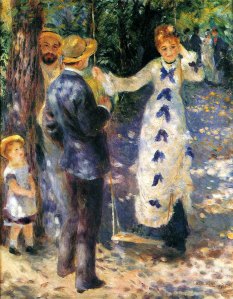 This next painting, La Balancoire (1876),also known as The Swing, can be found in the permanent collection of the Musée D’Orsay in Paris.  A framed print of this painting has also been a part of our living room since 1998.  The models in this painting, Renoir’s brother Edmond, Robert Goeneutte, and Jeanne, are also in his painting The Ball at the Moulin de la Galette.  In The Swing, Renoir again is depicting everyday life, en plein air, as was a common technique among the Impressionists.  I love how this painting catches the sunlight coming through the trees and casting shadows on the characters and the ground underneath.  The little girl is waiting in anticipation for her turn on the swing.  I imagine that she will have to wait for a while!  Renoir showed this painting as well as the Ball at the Moulin de la Galette at the 3rd Exhibition in 1877 .

Renoir painted this scene in the courtyard of a house he was renting on rue Cortot in Montmartre.  You can visit this same house today which is now the Musée Montmartre. 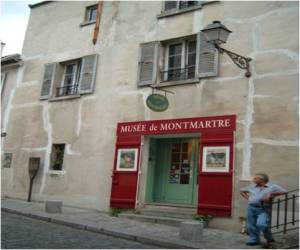 The final painting, A Girl with a Watering Can, can be found in the permanent collection at the National Gallery in Washington D.C.  I purchased a small placard of this painting, which also hangs in my living room, partly because it is such a beautiful picture but mostly because the little girl looks a lot like my daughter Jamie when she was young.  She has the same blond curls and sweet expression.  Auguste Renoir’s paintings continue to bring beauty to our world over a century later. 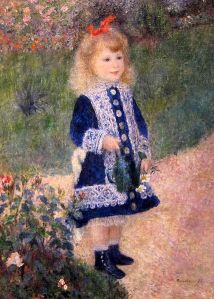 Copyright 2015 by Robyn Lowrie.  May be quoted in part or full only with attribution to Robyn Lowrie (www.frenchquest.com)