This blog post will be a departure from my usual reviews of French Art and Dutch Art as I am expanding my interests to German language acquisition and Art.  This interest came about after my recent studies on the German occupation of France from 1940-1944: the effects of the civilian experience of Occupied France and the German reconstruction after WWII.  To be honest, after reading about all of the art that was stolen and destroyed from around the world by the German forces during WWII, I was originally disinterested in reading about German artists or museums.

However, I realized that it was unfair for me to be prejudiced towards the earlier German artists and to discount their ability to preserve in their works of art the late 19th and early 20th century German civilization which was later destroyed during WWII.   Therefore, I will begin with my first German Art Review.

The first painting I will focus on for this post is Potsdamer Platz, 1914, by Ernst Ludwig Kirchner. [Nationalgalerie, Staatliche Museen zu Berlin].  Kirchner was part of the Expressionist group of painters who used strange colours, three dimensional shapes, and abstract surfaces. Unfortunately, many of his paintings, as with other Expressionist works, would be considered as Entartete Kunst (Degenerate Art) and destroyed under Hitler’s Regime . In fact Kirchner ended up taking his own life in 1938 fearing Hitler would annex Switzerland where he was living at the time.

However, for this blog post, I would like to focus on Kirchner’s subject, the Potsdamer Platz, and the important role it has played in Berlin, Germany.

Kirchner said that he didn’t want to portray the world as it was, but how he experienced it; what life in a metropolis felt like.  In Potsdamer Platz, 1914, his use of bucolic, circular curves intersecting rigid, acute angles shows a contradictory experience (11 Nov.). As with the Impressionist’s paintings of the 19th century, the figures in Potsdamer Platz, 1914 are hurrying to and fro and their eyes are cast down or diverted from others.  This shows the isolationism of a new era of the mixing of social classes across Europe.

There is quite a history of this plaza. The Potsdamer Platz can be traced back to 1685 and was built upon a road dating back to the Middle Ages running from Paris to St. Petersburg.  Frederick William built his palace here in 1660. In 1871, Berlin became the seat of the Prussian monarchy as is portrayed in Adolph Menzel’s The Departure of King Wilhelm I for the Army on 31 July, 1870.  Berlin had a population over 2 million, comparable to Paris at that time. In addition, Hitler had great plans to build a World Capital, Welthauptstadt,  Germania in Berlin near this Platz.

Ernst Kirchner painted this famous Platz in Berlin, the most congested in the city, while sitting at a sidewalk café across the street.  A city guide book of 1910 states that , “some 5000 trams crossed this intersection of five boulevards every day”. The guidebook also claimed that with the heavy congestion, this plaza could be “hazardous to health and life” (Taschen, para 3).

In Potsdamer Platz, 1914, the clock in the background displays the witching midnight hour along with the veiled figures, which are symbols of the outbreak of the first catastrophic wars of the 20th century.

The Potsdam railway station, seen in the background, was updated in 1872 and like the La Gare Saint-Lazare in Paris, became the hub of activity and fascination.

To the left of the station is a multi-purpose building with a cinema, cabaret and the Café Piccadilly which at the time boasted the largest in the world and seated 2000! That would be quite a feat for Starbucks!

All of this changed, however, with the Allied bombings of Berlin 30 years later.  All of the buildings in the Platz were decimated  mostly from November 1943 to February, 1945 as Hitler’s  Reich Chancellery was in very close proximity.  In 1961, a border dividing East and West Berlin was built straight across this Platz that we see in the painting.  The East German police patrolled one side while the citizens of West Berlin stood on a platform and looked over the wall.  In the movie “Bridge of Spies”starring Tom Hanks, which was released this year, this wall was actually being built here in the Platz and German citizens were escaping by the thousands.

Today, the rebuilt Potsdamer Platz now attracts around 70,000 visitors a day, rising to 100,000 at weekends.  The Platz has come full circle from Kirchner’s interpretation of the center of life and culture he painted a century ago to the futuristic center of commerce today. 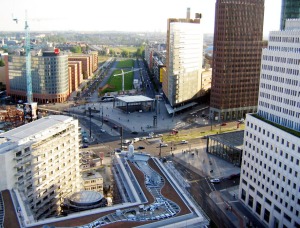 Copyright 2017 by Robyn Lowrie.  May be quoted in part or full only with attribution to Robyn Lowrie (www.frenchquest.com)

College Professor with over twenty years teaching in English Composition and Literature, French Language, and ESL classrooms of diverse International environments. Focused on developing instructional methods to help students achieve linguistic and cultural proficiency in a second language classroom. Ardent scholar of French history, literature and art. In addition, Content editor and Proofreader of Anthology texts and manuscripts for publishing. Translator of German and French texts.