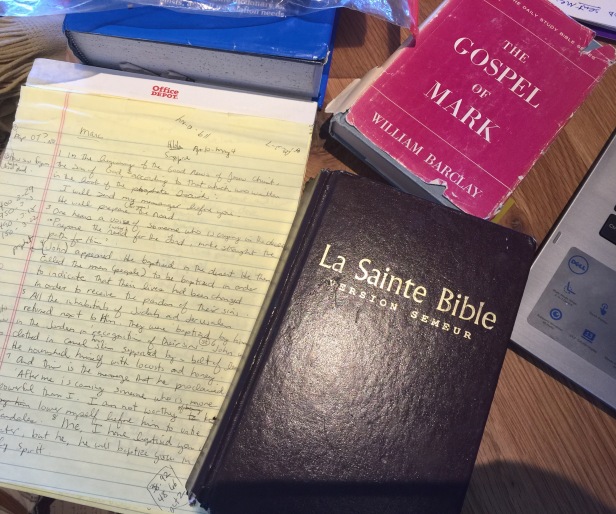 Three years ago, I set out on a Frenchquest of translating the New Testament of  La Sainte Bible Version Semeur, from French as there is currently not an English translation of this version. My purpose was two-fold:

First, I felt that studying the scriptures in a second language would force me to read slowly and carefully each word, phrase, nuance, meaning that was originally intended by the Holy Spirit. How cool to think that we, as English speakers, are actually reading a translation of the scriptures from Hebrew and Greek into English.  Therefore, the inspired words from God to the Hebrew and Greek writers were also inspired through each translator of Spanish, French, Chinese, etc. and as translators, this is an important factor to keep in mind. Translating scripture is not just allowing readers to perceive the text emotionally and artistically which corresponds to the aesthetic experience of the first readers as in literary texts, it is presenting a text which can and will be experienced on a spiritual realm, which is out of our wheelhouse!

Secondly, studying the scriptures in French has helped me keep my second language acquisition skills sharpened. In the process of translating, I strive to hear the first version of the work as profoundly and completely as possible, to discover the linguistic charge, subtle implications, complexities of meaning and suggestion in vocabulary and phrasing, and cultural inferences. Equally important is the emotional impact of words, the setting and mood, author’s voice, social context, etc. and the social aura that surrounds them. Just as we have tried to imagine the world that Jesus Christ was born into the first century based upon information from the Old Testament, World History and Biblical scholars in our context here in the United States, the French translators of this Version Semeur have had to use their context (France, Canada, Africa, etc).

Even though many scriptures are familiar to me from forty years of study and the cognates are very helpful (Jesus, Baptiste, Evangile, etc), I have to look up many unfamiliar words in the French dictionary which adds to my mental word bank! My French version La Sainte Bible has been my go to text since I began learning French in 2005. It was my Mainstay when I lived in Paris, the Rock that gave me strength and joy and still does each morning.  In addition, it is a core part of my curriculum when I teach French in the university as well as in private tutoring.

Since I began this goal of translating the New Testament three years ago, I have had to adjust my goal a bit considering I have only translated the book of Marc in that time.  Obviously translating scripture is much different than translating works of literature, most recently in my weekly posts of poems by Victor Hugo. As I previously stated, I wanted to really study the scriptures as I translated and, therefore, look at the original language in the Greek and refer to a commentary for each passage (“The Gospel of Mark” by William Barclay from The Daily Bible Series, 1954). What treasures I have found! What insight!

In this series of blog posts on “My Frenchquest: Translating the Book of Mark” I will share the insights and treasures that I have gleaned in this process.  Life changing. 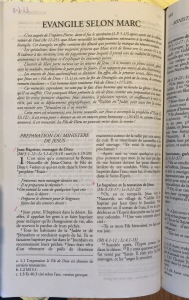 Copyright 2018 by Robyn Lowrie. May be quoted in part or full only with attribution to Robyn Lowrie (www.frenchquest.com)

College Professor with over twenty years teaching in English Composition and Literature, French Language, and ESL classrooms of diverse International environments. Focused on developing instructional methods to help students achieve linguistic and cultural proficiency in a second language classroom. Ardent scholar of French history, literature and art. In addition, Content editor and Proofreader of Anthology texts and manuscripts for publishing. Translator of German and French texts.